The Kent-Delord House Museum is home to an astonishing collection of late 18 th and early 19 th century portraiture along with many other works of art. Among the artists included in our collection are: John Singleton Copley, William Johnston, Abraham G.D. Tuthill, Jared Flagg, Henry Inman, John Wesley Jarvis, Ezra Ames, Robert Fulton, and Samuel F.B. Morse. We even have a 1640 Renaissance painting attributed to the Frans Francken School! The saying goes, a picture is worth a thousand words! Well, we’ll shorten the number of words, and tell you the amazing stories about the people and history of some of the paintings that are hanging on the walls in the Kent-Delord House Museum. 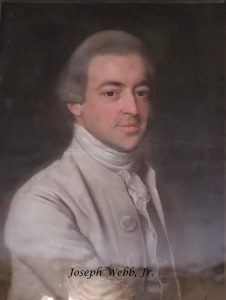 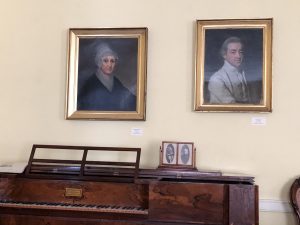 The two portraits prominently displayed over the pianoforte in the Gold Parlor are the parents of Henry L. Webb, Frances Henrietta Delord’s husband. Henry’s father was Joseph Webb, Jr. and his mother was Abigail Chester Webb. These and other Webb family portraits were inherited by Fannie (Delord) Webb Hall as she was the last of the Webb family lineage.

Joseph Webb, Jr. was the oldest of the six children of Mehitabel Nott Webb and Joseph Webb, Sr. Joseph Jr. was only 12 at the time of his father’s death, but being the first born, he inherited the house and the family business. In 1774, Joseph married Abigail Chester and they began their family in the Webb house in Wethersfield, CT. Revolutionary sentiment in the colonies was building at this time. The Webbs and the Chesters played critical roles during this period of our Nation’s history. During the Revolution, Joseph and Abigail had hosted many prominent individuals at their house, including notables of the Patriot cause. Thus their home became known as “Hospitality House.” One especially prominent visitor stayed in May 1781. The Webb's hosted George Washington for six days. In the Webb house, General Washington met with the Commander of the French forces, Comte de Rochambeau to plan what proved to be the final British surrender at Yorktown, VA. It was Joseph’s ardent support of the patriot cause that ultimately led him to financial ruin. In all his dealings with the American Army, Joseph accepted Continental money. Unfortunately the value of this money depreciated badly so that by the end of the war it was virtually worthless. “Not worth a Continental” was a common saying as the money retained only a thousandth of its initial value. By the end of the War, Joseph found his financial troubles eventually led to him going to debtor’s prison for 12 years! In 1790 Mrs. Webb’s family, the Chesters, bought the Webb House and Abigail and her children lived there until 1802 when it was sold. When Joseph finally got out of debtor’s prison, he and his family had to live in the Chester home as Joseph could not find employment. Joseph Webb, Jr. died in 1815 at the age of 66.

The painting of Joseph Webb, Jr. is a pastel on paper mounted on fabric attributed to John Singleton Copley. It has been estimated that it was painted in the early 1770s. It is believed that Copley was born in Boston around 1738 and spent most of his early life in that area. Copley has been deemed one of the greatest and most influential painters in Colonial America. Throughout his life he produced about 350 works of art. Through his realistic likenesses of persons and things, he came to define the realist art tradition in America. Among his works are portraits of illustrious Revolutionary War persons as John Adams, John Hancock, and Paul Revere. He also painted a portrait of Elkanah Watson in 1782. However, Copley was ardently apolitical, saying that “political contests being (were) neither pleasing to an artist or advantageous to the Art itself.” With the political unrest beginning to increase in the early 1770s, Copley’s Loyalist connections were a threat to his family. In 1774, he decided to go to Europe to study and paint, eventually settling in London where he died in 1815. He never returned to the United States. Boston’s Copley Square, Copley Square Hotel and Copley Plaza are named in his honor.

For more information on the Webb family, check out the blog right here on our website.

Open for the Season!